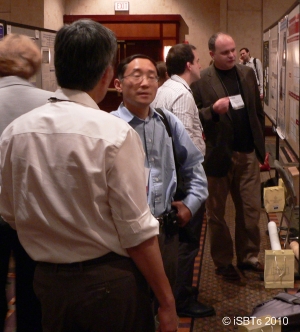 Click on the links below to view pictures from this year's exciting event.

Symposium on Immuno-Oncology Biomarkers, 2010 and Beyond
This highly attended program held on the NIH campus assembled key leaders for lectures and panel discussions.

General Meeting
The iSBTc Annual Meeting and Associated Programs are the premier events for interaction among both leaders and new investigators in cancer immunotherapy/biological therapy.

Session Presentations
Each year iSBTc provides a forum for the top scientists and clinicians to present their data in the field of immunotherapy and biological therapy.

25th Anniversary Reception
This outstanding reception held at the Smithsonian National Museum of Natural History provided a vital opportunity for attendees to network and share experiences in a stellar setting.

iSBTc Exhibit Hall
The iSBTc exhibit hall hosted 11 exhibitors and was visited by more than 500 delegates from this year's Annual Meeting.

Leadership and Staff
Meet the people responsible for running the Society including iSBTc leadership, program organizers, and staff.